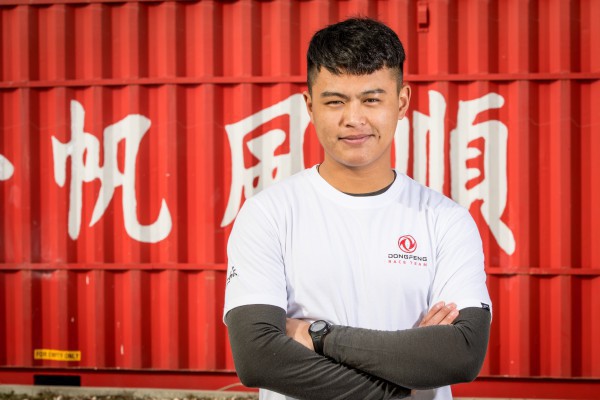 Number of Volvo Ocean Races:
This is his second with Dongfeng Race Team

Greatest achievement?
The moment I came back at 23 years old to do the second Volvo Ocean Race.

Best advice anyone gave you?
When we were training for the 2014-15 race, I left the team as I didn’t like the offshore racing. The whole team were so supportive and I remember one email Charles sent me. He told me his story, what he was doing at my age and how he had felt. It really helped my mentality and strength and it is something I will always remember. Did you know he hated offshore at my age too?

When and where did you start sailing?
I started when I was 13. My uncle, who is also part of the national team, showed me some sailing pictures and inspired me to get involved in the sport. I hated it at first though. I couldn’t swim and I was really scared. In fact, after half a month my coach even let me go home because he could see how scared I was.

What do you miss most when you are sailing?
Foods, friends and family.

What food do you miss the most when sailing?
Fresh fruit.

What makes you passionate about the Volvo Ocean Race?
I think I love it because of the length. You are racing for nine months which is a big test on your mentality and has really made me grow up and learn. You have to take care of both yourself and your friends onboard in a way that no other race makes you.

How would you describe Charles?
He is a really good Skipper who always tries to help us. We didn’t know anything about offshore sailing and he helped me a lot. He knows we are young and inexperienced but that doesn’t matter to him. He is good.

Charles on Black:
“A really impressive sailor who learnt very quickly last race. He has huge potential and you can already see he has really grown up and matured ahead of this race. He knows what to expect and he knows he can do it so he will push hard.”