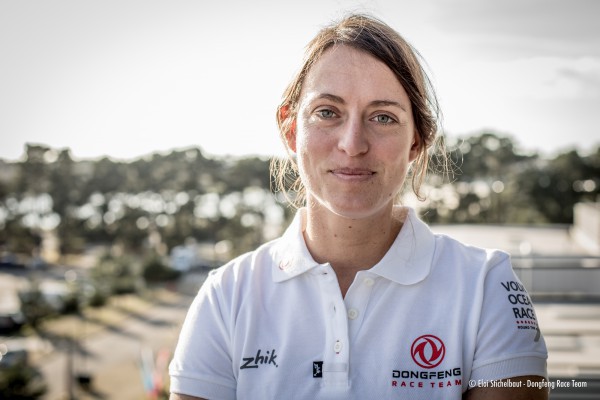 “We wanted someone as tough and competitive as Marie and Justine was the obvious choice,” said Caudrelier. “She is very experienced as a solo racer but also has the Team SCA background. She knows several of our sailors well so I have no doubt that she will settle in quickly during the leg to Hong Kong.”

“Marie wanted to have a break during the race which I think is clever because the Volvo is very long and very tiring, so I am giving her a break on this leg and hopefully she can have a good rest and come back in really good shape,” she added.

The opportunity to race with Dongfeng Race Team comes at the perfect time for Mettraux who has just finished the Transat Jacques Vabre and whose Figaro boat is currently in re-fit.

On Dongfeng she will sail – as she did on Team SCA – as a headsail trimmer and she is looking forward to racing with some familiar faces. “I know Carolijn Brouwer well,” she said. “We sailed together on SCA and I really enjoyed sailing with her. I also know Kevin Escoffier, who is a good friend, and Fabien Delahaye who has worked with me on routing in my Figaro campaign.”

Brouwer said she will be sad not see Riou on board for Leg 4 but is delighted to be sailing with Mettraux again. “I am more than confident that Justine is going to fit in really well in this team,” she said. “We did a lot of sailing together with SCA – she is a really, really talented sailor and she showed that during the SCA campaign when she became an extremely good trimmer and a very organised one too, which is also important.”

Mettraux has been watching how Dongfeng Race Team has been getting on and knows that Leg 4 – like the previous three – is likely to see a continuation of Dongfeng’s epic battle with MAPFRE.

“They have managed to go really fast so I will be really interested to see how they do that and how they manage to get that speed,” said Mettraux. “And yes, there is a little bit of a battle going on with MAPFRE and I think it will continue until the end of the race. I hope that we will be able to stay in front of them on Leg 4, but it is going to be an interesting contest to follow for the rest of the race.”