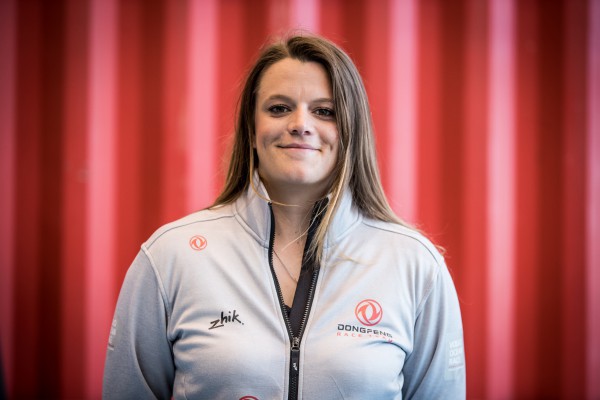 Languages: French and English (and a bit of Breton and Spanish

What do you like to do when not working?
Horse riding, being by the sea or mountains. Working with Dongfeng Race Team also means we can often be found surfing or paddle boarding together in our free time - hopefully one day I will be good at it.

Greatest achievements?
Receiving the “We made it!” text after sending two English sailors off on their first Transat was a good moment. Another proud moment was sending eight sailors (and boats!) off on the 2016 Solitaire du Figaro and having the same number at the end of the race - even if there was half a rudder missing on one of them.

Who inspires you?
Anyone who stands up to their convictions, anyone who tries to raise awareness about global warming and any person who pushes themselves as far as possible.

What was the best advice you were ever given?
Be nice to both yourself and to everyone else is a pretty simple one but one that you cannot forget. In sailing the best advice has to be “watch the boom”.

If you could wake up tomorrow in the body of someone else, who would you pick and what would you do?
I’d wake up in the body of a world leader somewhere and set up all the changes we need to stop global warming.

Favourite food?
I wish I could pretend it was some super healthy food but probably pasta or chilli.

What makes you passionate about the Volvo Ocean Race?
The intensity of the race and all the strength it requires for the sailors to push through and succeed. I also like that it is not only about the sailors as you can see the shore crew are pushing to their maximum to ensure they have done everything possible to help the sailors and allow them to focus on their race.